Believe me: all thirty-five years of attending Virtuosos who decorated their concertos by immense cadenzas to show technical know-how made me think of how curious a creature the typical bass-soloist is. I hardly ever yet caught one who was aware of the aesthetics or the style of our concerto’s provenience, or just about, what “a cadenza” means. In my view it is the real chance and challenge to open a window for focusing on the Contrabasso’s attributes and sound facets, and this in respect to the ancient, convex-shaped bow, the familiar one until the end of 18th century.

The present selected cadenzas rank from Johann Sperger’s or Franz Anton Keyper’s fame until Domenico Dragonetti’s early years, after he had abandoned Venice. They were the glorious protagonists of the “Golden Age” of our instrument, appearing on three-, four- or five-stringed basses on all European stages, inspiring about a dozen of composers who contributed works, bringing the treasure of pre-classical and classic concertante works to a number of forty-four in all. The present edited bouquet of fifteen cadenzas on nine concertos will introduce my own happy experiences from performing, accompanied by Chamber- or Symphonic Orchestras, which simply earned acceptance and sympathy for their brief and sometimes ‘blinking-eye’ moments —- but try constantly regarding each concertos individual quality.

Keyper, Franz
Cadenza for Rondo in Double Bass Concerto no 2 (or Romance and Rondo)

There are no reviews yet.

This site uses Akismet to reduce spam. Learn how your comment data is processed. 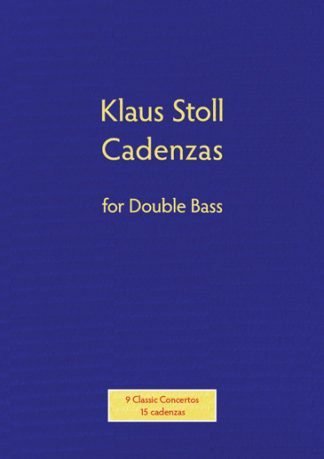